WGZS plays a variety of music genres throughout the day as well as programming from Native Voice One, such as the award winning, national call-in radio program, Native America Calling; Undercurrents; hosted by Gregg McVicar, is aired on WGZS seven days a week; Voices from the Circle, Soul Deluxe, Indigefi, hosted by Alexis Sallee; and Earth Songs are also offered via NV1. Additionally, we air Reveal, investigative journalism and groundbreaking storytelling; Indigenous in Music, with host Larry Knudsen, an enrolled member of the Ho Chunk Nation; Women in Music, hosted by Laney Goodman; Minn. Native News, and Minnesota Military Radio.

On Sunday mornings, the station offers a line-up of diverse programs such as: American Indian Living, Peace Talks Radio, Minnesota Matters, and Best of Our Knowledge.

Station Manager Dan Huculak, an enrolled member of the Fond du Lac Band, has been with WGZS since the station launched in 2011. Huculak’s career in broadcasting began in the 1980s when he did everything from filming video and producing cable television programs to announcing youth and high school football games in Michigan. He also worked at WKLK as a weekend announcer. Dan does the play-by-play for Fond du Lac Ogichidaag Girls and Boys basketball games. 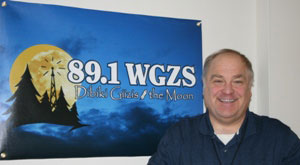 Pat Puchalla, a broadcasting veteran in the greater Duluth radio market, became the WGZS Operations Manager on Dec., 2013. A native of Superior, Wis., Pat has spent part of his career as a member of the B105 “Breakfast Flakes,” In addition to working in the Duluth/Cloquet area, Pat also worked as an announcer in Burlington, Col.; and in Bismarck and Fargo, N.D.

WGZS is now accepting requests to air local public service announcements. If you have a community-based, not for profit event that you need announced (Please submit in MS word format); please send by email to WGZS@fdlrez.com. Required information includes the name of the event, purpose, when and where the event will be taking place, and your contact information for questions. We appreciate two weeks’ notice when producing public service announcements.

Live Stream currently only available from within the FDL network.